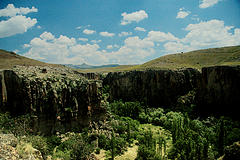 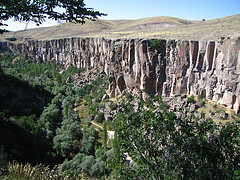 This valley is situated 40km from Aksaray and can be reached making a turn at the 11th km of the Aksaray-Nevsehir road.The canyon was created by the cracking and collapsing which occurred as a result of basalt and andesite lava from Mt. Hasandag’s eruption.  The Melendiz river found its way through these cracks, eroding the canyon bed and helping to form canyon we see today.  The Melendiz river used to be called “Potamus Kapadukus”meaning the River of Cappadocia.The 14km long, 100 -150m high valley begins at Ihlara and ends at Selime. There are numerous dwellings, churches and graves built into the valley walls, some of which are connected by tunnels and corridors.The valley proved to be an ideal place for the seclusion and worship of monks, and a hideaway and defense area for people during times of invasion.The decorations in the churches can be dated to various times from the 6th to the 13th centuries, and the churches can be classified into two groups.  The churches near to Ihlara display frescoes with oriental influence.  Those nearer to Belisirma display Byzantine type decorations.

Very few Byzantine inscriptions in this area can be read.  Above a 13th century fresco in the church of St. George (Kirkdamatl), the names of Seljuk Sultan Mesud II (1282 – 1305) and the Byzantine Emperor Andronicos II are inscribed.  This is proof of the tolerance of the Seljuk rulers. The best preserved frescos are to be found in the churches of Agacalti, Purenliseki, Kokar, Yilanli and Kirkdamatli